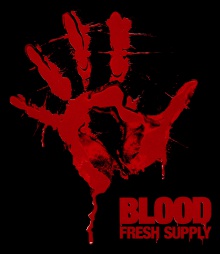 "Battle an army of sycophantic cultists, zombies, gargoyles, hellhounds, and an insatiable host of horrors in your quest to defeat the evil Tchernobog. Squirm through 42 loathesome levels filled with more atmosphere than a Lovecraftian mausoleum. Begin your journey armed with a simple pitchfork and earn more effective implements of destruction like aerosol cans, flare guns, voodoo dolls and more!"--Official description 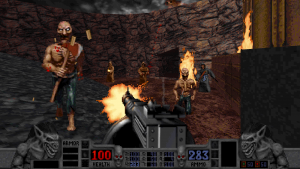 "Blood stood up extremely well over time and we are taking care to preserve all the qualities that made the game so special... It really only needs minor updates to provide a better user experience for contemporary audiences. By using some of the functions of Nightdive’s KEX engine, we’ll be able to provide compatibility with today’s video standards, with DirectX and Vulkan support. Similarly, we’ll provide compatibility with the current audio standards. We’ll add support for modern networks, Steamworks, and GOG Galaxy to bring this original game to more players. As part of this, we will preserve the accuracy of the game behavior. While these upgrades are relatively minor, we are confident that they will provide fans with a better, current generation gameplay experience."--Daniel Grayshon, producer at Night Dive Studios

"Yup, I am working on it. I was actually working on it on my spare time since 2015... Reverse engineered. I've been disassembling the game for several years and have a more or less clear outline of how everything works. Its somewhat pressuring as I am looking to go over the disassembly multiple times to make sure everything is perfect... Some things like the slipperiness is going to remain as it was intentionally designed to do that, but none of the engine's collision detection is going to be used. Though the new collision code will produce nearly exact same results; just less glitchy results... None of the original assets will be modified. This includes levels (despite my temptations)... Modding will definitely be possible in BloodEX... There will be mod support. The idea is that you put your mod into a folder along with any modded .ART files or INI files you include and you should be able to load a mod from there. Additionally BloodEX will allow you to define your own enemies and scripted AI logic. Additionally you'll be able to define your own custom actors and scripted AI logic..."--Samuel "Kaiser" Villarreal

"We're very happy for our friends @NightdiveStudio! They'll carry the torch with distinction, we have no doubt. Can't wait to play!"--Monolith Productions

"Atari, however, owns the digital distribution rights for the original game, which came out in 1997. The terms of its ownership includes limited provisions for updating the game. Atari chief operating officer Todd Shallbetter emailed Polygon with the following statement: “We are not changing the game. We have distribution rights and this version is just being updated and optimized for modern operating systems and hardware.”"--How do two companies own the rights to Blood?, Polygon (December 12, 2018)

Even prior to release, the effort was criticised for its usage of Nightdive's own Kex Engine rather than the original Build Engine, making it in many respects more of a recreation than a source port. Post-launch Fresh Supply has been harshly received by many in the community, particularly by regulars on The Postmortem and the Altar of Stone and the denizens of the Duke4 forums, for its perceived inaccuracy compared to Build powered ports like BloodGDX and NBlood. It has however been positively recieved by the general audience, with high scores on its store pages. It also was graced with top marks by reviewers like Gmanlives. This can partly be ascribed to excitement by casual players simply at the chance to revisit the cult classic.