Game Leader was a website in the late 1990s that tracked online players using the TEN service and also hosted custom maps. It had a prominent Blood section, alongside areas for fellow Build engine titles Duke Nukem 3D, Shadow Warrior and Redneck Rampage; later games were added with time, including Blood II: The Chosen and Shogo: MAD (presently inaccessible). Its earliest entry on the Wayback Machine is form January 1998, with news posts dating back at least until December 1997, and its last functional one is from December 2002. Thereafter it turns into an online casino games site. The earlier variations of the site are the best preserved, including a semi-functional map database. One of its principal maintainers was Arjan Van Rossen. 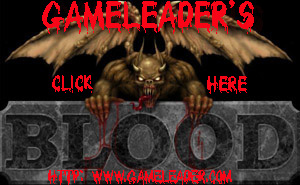