This article is about the character Gideon, for the Blood Wiki assistant moderator, see User: Gideon 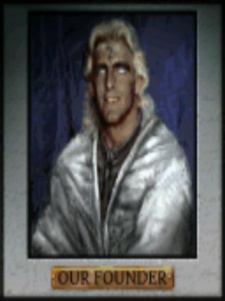 "Gideon is an extremely intelligent and ruthless man. The Cabal is his life. He has been groomed since childhood for his position, and he is utterly obsessed with the preservation of the Cabal and its functions. He has single-handedly led the Cabal into the modern world by pulling it out of the shadows and building an empire around it. Under his hand the Cabal has become more powerful than ever before, controlling the economic tides of many major nations and poised on the brink of world control. And the Cabal has achieved all of this without overt bloodshed or widespread public knowledge, by simply suppressing the will of the public through economic and social depression. "--Blood II: The Chosen website

Gideon is the leader of the Cabal and primary antagonist in Blood II: The Chosen, and was voiced by the late Ted D'Arms. He also functions as a kind of narrator during the opening of Blood II as well as for the entirety of The Nightmare Levels; a function he was originally going to fulfil for all of of Blood II.

Gideon is a ruthless and intelligent man, the perfect leader. He is obsessed with the preservation of the Cabal and single-handedly pushed the cult into the modern age by pulling it out of the shadows and building an empire around it through the foundation of CabalCo. At the point where Blood II starts, the Cabal has become more powerful than ever by suppressing the will of the people through economic and social depression, all without overt bloodshed or widespread public knowledge.

"I dragged the Cabal into the 21st century. We've become a multi-billion dollar corporate empire with our claws in everything from adult entertainment products to daytime television. Yet all of this is nothing compared to the power I will wield when I suck the marrow from Caleb's diseased bones and absorb the essence of Tchernobog."--Gideon from cut dialogue in the Blood II opening

Although he has the world in the palm of his hand, Gideon's primary mission is to kill the Great Betrayer and restore Tchernobog. He works closely with a Prophet, who acts as his bodyguard, and the Mad Scientist, who is responsible for developing the Singularity Generator weapon they use when encountering Caleb. Unfortunately, the weapon does nothing for them but bring back the Chosen through unknown means, as well as lead to further deterioration between the boundaries of the realities.

It is unclear whether Gideon's motivations are to become the next incarnation of Tchernobog or to exact vengeance against Caleb, or something even more sinister. Despite their proximity throughout the game, and the weapons at his disposal, Gideon does not appear interested in killing Caleb. Instead, he leads Caleb on a cat-and-mouse chase throughout the city. He seems to be trying to draw Caleb somewhere, most likely to CabalCo Enterprises, but the reason is never stated. 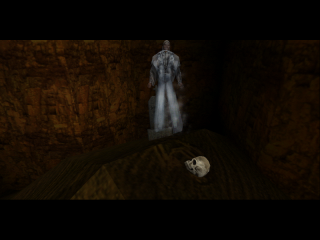 "My undying soul is bound to this cranial prison for all eternity, no thanks to Caleb and his Chosen ones. Anyway, there's no sense being bitter about it. I imagine one day I'll serve as a muse to some unfortunate playwright who wanders this way."--Gideon from the opening of The Nightmare Levels

Gideon was groomed for leadership of the Cabal since the day he was born, something which presumably happened sometime after 1928, although his proper date of birth and his exact age remain undetermined. His significant achievements, appearance, and demeanour do suggest a man of some years; most of his life appears to have been spent building up his corporate empire, his desire to destroy Caleb taking a backseat to the cult and the company's day to day operation.

"Despite these significant achievements Gideon is unsatisfied. As long as The Great Betrayer, Caleb, lives Gideon feels unworthy of his position. He has dedicated himself and his pride towards finding and destroying Caleb, and the other Chosen. To do so, he'll go to almost any end including selling the Cabal and his soul to the darkest of threats, the most evil of evils. He will plunge to depths unknown, and achieve power unimaginable, all to put an end to the Chosen."--Blood II: The Chosen website

His first documented action against Caleb took place in the year 2028 wherein he sabotaged the train that Caleb was on, forcing it to breakdown and crash. He then forces a pursuit that leads them to the Lafayette Museum of Antiquities, where he tries to get his Prophet bodyguard to use the Singularity Generator on Caleb to ultimately defeat him. Instead, Gabriella is summoned, and the doors of reality begin breaking down, leading to an invasion of creatures from another reality. Gideon, along with his Prophet and Mad Scientist companions, manage to make an escape during the confusion, leading the enraged Caleb on another cat and mouse chase throughout the city.

Gideon and company eventually reach the rooftop of a Cabal Safehouse, where he has a helicopter waiting. Caleb catches up with them right before they are able to climb aboard, something which results in the Prophet once again firing his weapon at Caleb, which this time manages to bring back Ishmael. After delivering one last threatening speech to Caleb through a megaphone Gideon departs, leaving Caleb and his new found companion behind again. He arrives back at CabalCo headquarters, where he has another surprise in store for Caleb. He has already trapped an also resurrected Ophelia that had previously made her way through the rifts, and now has her tied to an obelisk in his own personal temple. When Caleb predictably arrives to rescue her, Gideon appears to whisk her away again before they can have a full and proper reunion. Caleb responds to this by eventually pursuing Gideon all the way to the rooftops of CabalCo Enterprises, where a man to man firefight ensues.

Caleb wins the duel and successfully frees Ophelia, but Gideon manages to escape yet again, this time through a portal into the other reality. Caleb once again follows, ignoring Ophelia's advice that by doing so he is simply doing as Gideon wants, and eventually catches up with him in an abandoned temple. Gideon almost immediately transforms into a giant spider creature, but this is still not enough to stop Caleb from subsequently overpowering and killing him. Or at least, that is how it appeared...

Gideon later shows up in a spectral form, and states that after his defeat his soul did not in fact perish. Instead it was trapped inside his skull, forced to spend all eternity imprisoned in the reality of The Ancient One, pondering life and death while also observing the actions of those around him. He is thus a party to the Chosen's encounter with The Nightmare, something which he observes and comments on from his own unique vantage, while also swearing that he will one day return to take his revenge on Caleb (the death of Ted D'Arms would presumably complicate this should a new game ever be made), something which the other Chosen are somehow able to pick up on and interrupt with their own comments, much to his chagrin.

Gideon has the ability to teleport and fights mostly with ranged attacks. On the rooftops, he can instantly move from one end of the stage to the other and uses laser beams and explosions. Middle range weapons or the Sniper Rifle have proven to be effective.

Once he becomes Undead Gideon, the penultimate boss, he becomes much more difficult to defeat. The Vulcan Cannon and other high-powered weapons are recommended. He has a long melee range due to his long legs and has a sweeping laser beam.

"One of the things that I think is lacking from many 3D Shooters is an identifiable villain, so in Blood 2 we'll be introducing 'Gideon', the leader of the Cabal. Gideon has spent his entire life being groomed for his position, and is determined to destroy Caleb and the other Chosen, who the Cabal refer to as The Great Betrayers, no matter what the cost."--James Wilson III 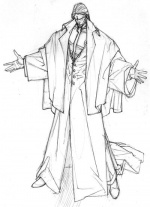 Several unused audio clips from the Blood II REZ file indicate that Gideon was originally supposed to provide narrations at the end of each chapter that would compliment his initial game introduction, further fleshing out his own motivations, that of Caleb and the Chosen, and providing a more direct explanation about the widening rifts and the invasion of The Ancient One, as well as other cut story elements from the game:

"None of us knew what the rifts were or where they came from. But we all saw them as the same thing – power. A way for us to destroy each other more efficiently. All we needed was the proper artifact to control it – the channeling knife. An ancient artifact of the Cabal, it lay broken in two pieces somewhere in Old Town, and the Cabal was determined to find it first."--Gideon unused sound clip

"We lay on the brink of destruction. And yet we charge forward with nothing on our minds, other than our own petty vendettas. We were doomed. The world was doomed. All that was left was to settle our scores before the end came."--Gideon unused sound clip

"And so the Chosen proceeded into the rift, to right all the wrongs despite the futility of their actions. They'd become humanity's most unlikely of heroes destined to destroy us all if they succeeded. But I was not through with them yet."--Gideon unused sound clip

Designer James Wilson III was quick to emphasize the importance of Gideon to the game's overall story.

"I would also like to mention that Gideon, the leader of the Cabal and main adversary of the story -- hard to call him a villain considering who he is up against -- gets quite a lot of attention as well, and is a very well-developed character. You cannot have a good story of this type without a worthy and intriguing villain, and Gideon will be just that! "--James Wilson III

The portrait of a younger Gideon found in the CabalCo offices appers to have been based on the visage of professional wrestler Ric Flair.

Gideon has received a mixed reception from reviewers:

"Stephan Weyte, who voices Caleb, does a fantastic job with the material and really stands out amongst the rest, as does the late great Ted D'Arms who voices the main villain Gideon ... Early on you are introduced to Gideon who serves little purpose and comes across as a bad James Bond villain who, despite his best efforts to kill Caleb, repeatedly wastes multiple chances to do so.--"Blood 2: The Chosen Review (Gggmanlives)

"The plot does not propel the title since it consists of little more than chasing Gideon for 30 maps ... The most fear-inducing moment in the entire game comes as Caleb catches up to Gideon. The camera turns from Gideon to Caleb, and Gideon gurgles, "Just a moment. I am turning into something unpleasant!" I was afraid to look, but the ensuing creature had no real effect on me and died in seconds ... Gideon, the self-proclaimed "sinister genius," sounds more like the nemesis of Road Runner than the leader of a homicidal cult.--"David Laprad - Blood 2: The Chosen Review (The Adrenaline Vault)"

Others | CabalCo | Cultist Language | Ranks of the Cabal