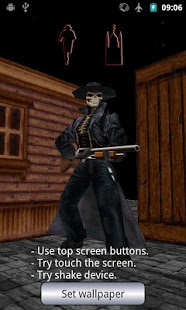 "The collection of eight unique 3D models with animation. The gloomy environment, including a dark forest, an empty graveyard and abandoned docks. Each model contains a set of sounds, and full interactivity. You can control it accelerometer or taps on the screen. According to your order, it will jump squat and complaining about her attempts to click. Old and new characters on your screen, robots, gothic fairies, grim thing and armored leaders. In addition, any of the models you can set up as an interactive live wallpaper."--Official description

Gothic 3D Models is an app for Android available from Google Play that features, among others, a Caleb model complete with animations and sounds. It also has a skeletal skinned version, and backdrops that use Blood textures. The app can be used as a interactive live wallpaper. It was created by developer Mistlurker, seemingly from Russia, and last updated on July 4, 2013. The actual content appears to be based on custom assets for Quake II, and are therefore presumably in MD2 model format. A few websites claim to have a version that works on Windows Phones.