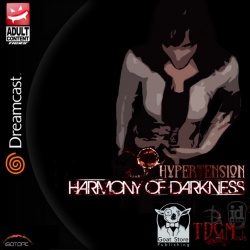 HYPERTENSION was an episodic series of fictional multi-platform first-person shooter/hybrid role-playing games in development by TDGMods. It was a "re-visualization inspired by the computer game Blood", which began development on August 13, 2008, although the game was conceptualized weeks earlier.

As of 2015, it is now called Hypertension: Harmony of Darkness and has an all new cast of characters, while implementing a version of the gameplay that was based upon Blood.

Much media was shown off between 2008 and 2011 for the original version. It was heavily advertised due to its inclusion on the Sega Dreamcast videogame console.

The game uses technology called "Hyper3DGE", which is directly derived from and is the direct continuation of the EDGE engine, which is based upon id Software's DOOM Source Code. It is primarily being developed for the Windows, Mac OS X, and Linux platforms, as well as the Sega's Dreamcast console.

The original game dealt with two alternate timelines - one with Caleb, and the other with a new character named Aurelia. It was meant to bridge the gap between Blood and Blood 2. The project contained new single-player and Bloodbath maps. This was the focus of the project for many years, until 2011 when the projects goals changed.

On August 17, 2011, a little over 3 years after starting the project, the team decided to completely scrap all of the copyrighted Blood and Blood 2 content for original material, though the existing models and code will be saved. The game will retain the basic elements of what made Blood fun in a way that does not violate copyright law.

In the following month, the original design team disbanded over license disputes relating to Hypertension. A side project was started, to serve as a mod for Transfusion, to import some of the maps and models from the project. This project (also called "Hypertension") is covered legally as it runs directly on top of Transfusion.

On January 1, 2013, TDGMods revealed through their Facebook page that Hypertension would be rebooted. The game would retain some of the same levels, engine, and gamecode. Rather than being multi-platform, it will only release on Sega's Dreamcast. The assets will be replaced to comply with copyright law; and under this idea, will still retain most of the gameplay implemented while being directly "based" upon Blood.

In February 2014, GOAT Store Publishing, LLC was revealed to be the publisher. The game was officially renamed to "Hypertension: Harmony of Darkness" and had its plot modified to serve as a prequel and sequel to SCOURGE, which is loosely related. On May 14, 2014, TDGMods released a new trailer at the Midwest Gaming Classic, also via Youtube.

In 2015, the developers released new footage of the game in action. It currently has a late 2015 to early 2016 release date scheduled.

Hypertension initially started as a Blood reboot. The game went through many revisions from 2008 up until 2011. While sharing a "common" Doom engine with ZBlood, the two projects had different goals and used different engines.

The old version of the game in 2008 contained revamped gameplay and plot additions, and featured participation of various developers and amateur actors for cutscenes. The game's score was written and composed by Kevin Macleod, alongside other contributors. Mindburner wrote the main theme song for Hypertension, entitled "Your Slave". Avenpitch, who originally signed on at the beginning of the project, will provide additional game OST and character themes. On May 7, 2009, the first public video (a teaser trailer) was released showing rough development.

The old version had two releases - Episode One, which covered the main campaign, and Episode Two, finished the story up with a new character and setting. Both titles will come out for the main supported platforms, with only Episode One being available for the Sega GenesisCD - 32X, and the Nintendo 64 (an expansion pack will be required). In June the team released the first rough footage of the second planned game, Episode 2.

In late June 2011, it was revealed that the team has finished the first multiplayer mode - splitscreen cooperative play. This comes after nearly a decade of requests to implement a multiplayer mode in EDGE (now 3DGE). To celebrate, the team put out a new gameplay trailer demonstrating early functionality.

In July 2011, the team scrapped the current iteration of Episode 1 and chose to recode all of the AI and start fresh with the maps, which they call "Phase X". Episode 1's design was rewritten and finished in mid-July, with the current team focused on redesigning based to the new specs. The new game will not be based on Blood so heavily for its base - instead on an original backstory based on the characters from Blood. They re-branded the series an adventure-shooter inspired by Blood, rather than being a remake or "re-visualization". This idea was eventually made into an original IP unrelated to Hypertension.

The game was 85% complete, including graphics, source code, sound design, and maps (which were all original).

Between August and September, the game was shown off to American publisher Goat Store Publishing, LLC, who awarded TDGMods (Isotope SoftWorks) a development contract for Hypertension, officially taking over as publisher and distributor. However, Atari's litigation began when the publisher got involved with the intent to sell commercially.

In January 2013, Atari cleared the development using the name "Hypertension: Harmony of Darkness", and allowed the team to continue as long as Blood assets were not used - Transfusion's assets were not affected, but ultimately later replaced. A new team was hired based on the source code from the old version, and the gameplay established in the source code could legally remain.

As of 2015, the game's development continues. The shooting mechanics are still inspired by BLOOD, but everything else is original. New characters were created, voice actors hired, and new gameplay mechanics were established. Blood staples, such as the sawed-off shotgun, axe zombies, and other memorable assets were redesigned in 3D, loosely based on Blood. The game currently has a early 2016 release date.

Hypertension runs on a custom engine called Hyper3DGE, which was originally developed solely for Hypertension. On April 9th, 2011, EDGE closed development for good, after 14 years of DOSDoom's continuation. In direct response, a new source port started public development, aptly named "hyper3DGE". This forked engine brings in numerous enhancements and special features that were not part of the original EDGE in its lifetime. It is actively maintained, both for Hypertension and for public use. It is available under the GPLv2 license.

The game initially started on EDGE version 1.29. The engine has now been heavily modified and as of 2015, reached version 2.0.1, which includes interpolation and the MD5 model format, among other enhancements.

The game garnered its fair share of criticism through the Blood community over the commonly established tropes being "redesigned" or "re-imagined". Thusly, Hypertension went through many revisions, coming close to a replica by the time it was cancelled. A dispute was opened through the Transfusion's forums over the legality of the project, and was ultimately decided that any project not using the officially licensed Quake engine or Blood/Build engine was in violation of the official Monolith EULA, and was deemed illegal. Game content ported from BUILD to Lithtech (for Blood II) was too deemed in violation of the EULA.

The game was also compared by some to Blood II: Resurrection, though both projects had different goals and used different technology.

The modeled assets from Transfusion are covered under the Creative Commons Attribution-ShareAlike 3.0 Unported, which states that fair use is to be granted as long as the assets are released back into the public domain. As the team plans on migrating a few holdovers to the new version, the models will be reworked, but released back to the public and Transfusion itself upon game finalization.

Harmony of Darkness is being developed by Isotope SoftWorks: