An ad for JoJo from Blood

JoJo the Idiot Circus Boy (otherwise Jo Jo or Jo-Jo) is a recurring side character in the Blood universe. He has never been featured as an actual character, nor plays an actual role in the plot, but shows up in posters and advertisements on walls, particularly in the Dark Carnival in Blood where he is billed as the main attraction. The pictures on the posters indicate he is a circus freak, possibly resembling Bat Boy.

JoJo is not a single being but several people who run down through incarnations. He is depicted as commonly stored in a circus cage, lying on the floor only with hay. It also seems to be suggested that the JoJos had less than adequate sanitation and that they were often kept as forced workers. Many JoJos seem to have entered the circus freak role out of financial or social desperation, and often it was a trap both physically and emotionally. In Blood however JoJo was also depicted as being scheduled to attend a book signing, probably his own, suggesting that life did improve for the freaks since the time of the previous descriptions.

His exact act is not known, but when Caleb enters his area in the Dark Carnival, there is a tightrope contraption over a pit of writhing snakes. There are also suggestions of magic tricks, leading to carnival announcers hyping the show with the remakr "You will believe a potato can fly! Come see the amazing JoJo!" These magic tricks may have been tricks of the eye, or maybe in some cases actual magic. 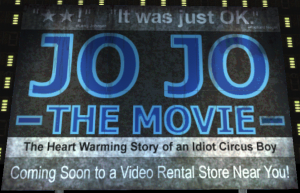 An ad for Jo Jo - The Movie - from Blood II: The Chosen

The interstitial texts in Blood II: The Chosen reveal more about the traditions' fate after the events of Blood. One notable entry states that it is used as a marketing brand by an unspecified corporation (possibly CabalCo). A sign also reveals that the character now has its own feature film, described as "a heart-warming story of an idiot circus boy", with it stated that "it was just okay" and given two stars by film reviewers Richard Noyin and Long Johnson.

In The Nightmare Levels, Ishmael confesses that he had played JoJo in the circus, before he received a message from Tchernobog commanding him to kill everyone and come to his side. He adds that visitors were encouraged to "throw little clumps of dirt at him", as was a common fate for many JoJos. Gabriel was also admitted to having visited the freak show every year as a child with his "papa" and would torment that time's JoJo.

There is some debate over where Monolith Productions found the name JoJo. Some postulate that it came from the real life professional attraction JoJo the Dog Faced Boy, while others point to a few lines from the 1995 film Tommy Boy or the manga series JoJo's Bizarre Adventure (a name close to C5L3: JoJo's Big Adventure). It has also been suggested that it could be a reference to several songs that have used the name JoJo, with the actual truth of any of these theories being unknown to the Blood community. If it did come from the Dog Faced Boy, than it shares a similar irony as to how it is depicted in the games, as the real man who played the primitive savage half-man half-beast was actually according to many sources very intelligent, in a close parallel to Ishmael's role.

In Blood there is a cheat code "JoJo" that activates "Drunk Mode", which is exactly the same as being bitten by the red spider, causing delirium.

It was also the subject of the fan fiction: JoJo the Idiot Circus Boy focusing on Ishmael's stint and his escape.

JoJo (aka Ishmael) also has a brief cameo in the fan made movie Duke versus Caleb part three.