"Kevin Kilstrom is our premier artist, animator, blue screen videographer, and model maker. After graduating from Washington State University with a BA in Fine Arts, Kevin worked as a senior artist and supervisor for a screen printing shop. Kevin dabbled in computer art during his spare time and had begun development on an arcade action title when he was invited to become a founding member of Q Studios. Kevin is now responsible for every aspect of art development, and wonders where all his spare time went."
--Q Studios website 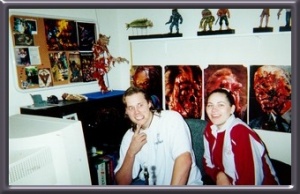 Kevin Kilstrom was the head artist and character modeller for Blood and its Plasma Pak expansion and was the head artist for Blood II: The Chosen and its The Nightmare Levels expansion. He also worked on the Blood website and did some level design, and was the art manager for the cutscenes (he also made the game's concept art). He also created a good deal of the 3D and 2D art for Blood II and is credited for helping with the "phone gags and childishness". His wife Francine Kilstrom is listed in the special thanks section of the Blood credits.

He started work at Q Studios in June 1994, before merging with Monolith in July 1996. He worked at Monolith Productions until April 2006, working on Sanity: Aiken's Artifact, The Operative: No One Lives Forever, Alien versus Predator 2, The Matrix Online and pre-production stage of F.E.A.R. 2: Project Origin, while before Blood II he worked on Claw, Get Medieval and Shogo: MAD.

In 1999 he was also the art lead on TNN Outdoors Pro Hunter 2 and Rocky Mountain Trophy Hunter 2. He then worked for FASA on the game Shadowrun, before from May 2007 to July 2014 rejoining fellow ex-Monolith staff member Brian Goble at HipSoft, most notably contributing to their popular Build-A-Lot series. He was educated at Washington State University.

"Kevin was a traditional artist and sculptor, with no 3D experience and we had no access to 3D tools. So we went old-school and put together a green-screen rig. Kevin either built or scanned nearly every sprite in the game and hand-drew and animated everything else."
--Nick Newhard, 2014 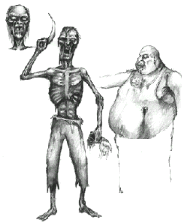 "No One Lives Forever"