Difference between revisions of "Mike Dussault" 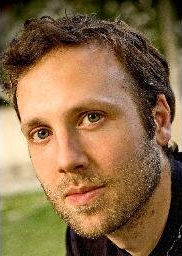 "I've been programming since I was 13. The first programs I wrote were character generators and small text adventure games. Before I came to Monolith, I worked at Media Vision on a game called Quantum Gate. Then I worked at Zombie on a game called Locus. While at Zombie, I met the founders of Monolith, and when Monolith got started, I came over. I've been working on Lithtech for about 3 years. My favorite compilers are the MSVC and the Intel compiler. I like the code the Intel compiler generates better, but MSVC compiles much faster. I'm the tech lead on Lithtech. I've been working on it since day 1, and I basically oversee development of new technology in Lithtech. Each week, the team goes through old and new feature requests, and decides who's going to do what. I usually focus on graphics, physics, networking, and the code that binds everything together. "--Mike Dussault

"My first game programming job was with Zombie VR Entertainment in Seattle. I worked there for about a year on Locus, a 3D sports-ish game. I wrote the networking, interface, tools, and part of the sound code for Locus. After Locus, I was tech lead on a very cool game we were pitching to publishers, but I left after some internal turmoil. A few weeks later, I heard that Monolith was starting up. Toby Gladwell (one of Monolith's board members) and I had postulated on lots of ideas for 3D engines while I was at Zombie, so I spoke to Toby and came onto Riot. It's funny, because the first Riot meeting we had was John Jack (product manager), Toby, and I, sitting around saying, "hmmm.. so what do we want to do this week?" We were starting out completely fresh, with nothing but design drawings and a small design doc. It was a pretty cool feeling. My current involvement with Riot is as lead engineer on DirectEngine."--Mike Dussault, 1997

Mike Dussault is a former Monolith Productions employee best known for being the head developer of the LithTech engine between 1997 and 1999. One of his first projects was a Doom mod called "WolfDoom", originally titled "LastWolf" (as in "Last Wolfenstein 3D Ripoff"), as well as custom made pallet, guitar cord and graphing utilities. His first original game was a C-programming game called BattleFish, inspired by C-Robots. 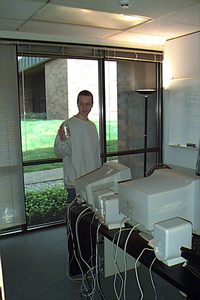 In 1995 he worked a virtual reality racing game called Locus for a Seattle based developer Zombie Studios, before moving to Monolith in 1996; Zombie would later licence LithTech itself. As head for LithTech ("The Creator"), he lead the development of the first two versions of the engine, and oversaw its use in Shogo: MAD, Blood II: The Chosen, No One Lives Forever and Alien versus Predator 2. In Blood II his name can be found as one of the inhabitants of the Cabal Safehouse, and in Shogo there is a character named after him.

In January 2000 he took up employment at Valve Corporation as a "mecca for innovative research and development", where he worked on the Half-Life, Counter-Strike, Team Fortress, Portal and Left 4 Dead series, among other projects. In early 2011 he left to co-found a new company with Kelly Bailey called SunSpark Labs, which focuses on making mobile entertainment content. Supposed access to his resume by a contract artist lead to later denied rumours that a third Half-Life game is in production. In his spare time, he plays guitar and piano, writes code, reads, writes code, hikes, writes code, attends punk shows and cooks. A Mike Dussault is listed as a producer on former Monolith cohort Nathan Hendrickson's film The Hollow One, although if this is the same person can not be confirmed.

"Mike is a senior designer and developer who worked 10 years at Valve and wrote his first commercially successful game engine at 19. After joining Valve in 2000, Mike contributed to many of Valve’s major products, with special focus on network architecture, special effects, and graphics. As part of this work, he created a distributed computing system that tied all of the office computers into one big supercomputer for lighting and visibility computations. He also worked to foster the mod scene and shipped the Half Life 2 SDK for mod developers. Before joining Valve, Mike worked at Monolith where he built the Lithtech 1 and 2 game engines, which shipped in more than 65 games, including Monolith’s own NOLF series as well as Shogo: Mobile Armor Division. In his spare time, Mike likes to travel to untouristy places like the Tanzania interior and Pakistan, learn Urdu, and devour science fiction. He’s also trying to beat Gandhi’s one-day walking record of 55 miles and so far has made it to mile 47."--SunSpark Labs profile

"I'd like to clearly state for the record that LithTech would not be where it is today without Mike's incredible talent and effort. He has helped to build a great and highly skilled engine team, and his personal efforts have been nothing short of spectacular over the last few years."--Jason Hall