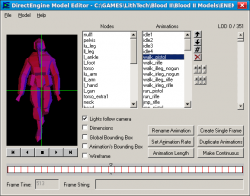 ModelEdit showing a Fanatic model
A later version of ModelEdit

"ModelEdit started simply enough — the tool let our artists view animations for a particular .ABC file and trim down the number of keyframes in each animation based on what looked good. ModelEdit supported the same interpolation that the engine used, so what you saw in ModelEdit was what you’d get in the game. However, once we had this “post-process” tool, a flurry of features were quickly implemented when we suddenly realized, “Wow, how did we ever get along without these features?” Next came the ability to tag keyframes to trigger game events, such as character footstep sounds or firing information for weapon models. Then came the ability to copy, paste, and import new animations into a model from another model, which made the process of exporting new animations or models much easier for our 3D artists. Mike Dussault and Brad Pendleton, the two engineers heading up LithTech development, spent some serious time working on ModelEdit, but every hour they spent saved countless hours for our artists, designers, and game engineers."--Postmortem: Shogo: Mobile Armour Divison - Game Developer magazine

ModelEdit is the 3D editing and animation tool for LithTech 1.0 used for Shogo: Mobile Armour Division and Blood II: The Chosen. Making the jump to true 3D, its closest equivalent is the ArtEdit program for the original Blood.

The program was notably updated for the version 1.5 of LithTech first licensed out to other developers, most famously used in KISS: Psycho Circus - The Nightmare Child, which allowed models to be displayed with their textures applied, as well the ability to shrink or expand models or change their bounding boxes. Unfortunately, slight changes to the DTX texture and ABC model formats make direct conversion of the Blood II and Shogo texture maps and some animations difficult, although this has been worked on by User:Gideon and more extensively by the Circus of Blood project. The Psycho Circus tools were also only released in an alpha state.

"ModelEdit for Lithtech Isn’t a full featured modeling program. You cannot articulate models by changing the angles of joints and such, you cannot create genuinely new animations or re- texture. You can alter existing animations however, and if you’re creative, you might be surprised at what can be done. There is a special rez I’m uploading just to show off some of the changes that are possible."--W.L.Branyon