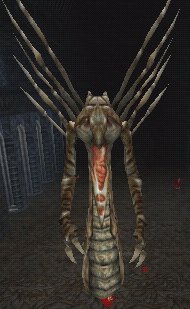 The Naga (also known as the Dragon) is boss of chapter one in Blood II: The Chosen, the only time it appears in the game. It appears in the basement of the Cathedral and, due to its large size, is immobile. It attacks by throwing spines from its back, firing lasers, and causing rocks to fall from the ceiling. There are alcoves in the wings where a player may hide and gather power-ups. If the player tries to fight the Naga face-to-face, it will pound the ground, releasing a shock wave causing massive damage.

It's appearance is similar to that of a Shikari, implicating that this may be the mother of those animals (similar to Shial and the Spiders in the original Blood).