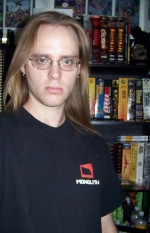 He has drawn several pieces of fan artwork for William Weilep (Willis) featuring Caleb or "Calebesqe" characters. On his artwork he commented, "I've never taken an art class before, I tried art in college but dropped out after about a week. It was way to boring. I've been drawing since (what did my mom say...) about 5 years old. It's all natural." Even back in first grade he was drawing stick figure characters, though the violent tones of the work attracted the attention of the school counsellors.

He has also come to prominence for his observations on certain interesting developments with regard to the official listings on the Blood copyrights, noting that titles whose intellectual property was thought to be previously held by others are now being listed as copyrighted by Warner Bros. He is of German ancestry with parents that came to America fleeing the Second World War.

On the Transfusion Forums, which he joined on September 27, 2004, he listed his interests as "drawing, writing, gaming" (elsewhere extended to include "... cartoons... profanity", with his occupation listed as "I do things that need be done" and biography as "I game.... tis all you need know"). He is also active on the guru3d.com forum, 3D Realms forums (where he founded the "Monolith Productions' Group") and Gearbox Software forums. His briefly maintained blog was called "Random thoughts of a deranged mind". His activity on the 3D Realms Forums earned him a spot on the lengthy Duke Nukem Forever credits roll.