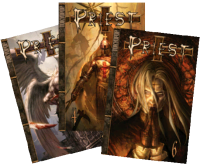 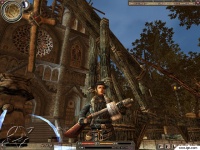 This article is about the manhwa inspired by Blood. For the boss from the Plasma Pak see The Beast. For the revolver-carrying cultists in fan-made Blood TC and ZBlood see those game's articles.

"In the frontier of the American West, a veil of evil threatens to engulf humanity. Servants of the fallen archangel Temozarela are paving the way for their dark lord's resurrection. One man stands in the way of the apocalypse: Ivan Isaacs, a fallen priest who sold his soul to the devil Belial for the power to fight evil. Armed with a wicked blade and silver bullets, Ivan will give the heretics a baptism of blood in his pilgrimage for humanity's redemption. An epic journey across hundreds of years and spanning the globe, Priest is the most ground-breaking manga to come from the new entertainment hotbed of Korea."
--TOKYOPOP

Priest is a manhwa (Korean comic) series created by Min-Woo Hyung (or in proper Korean, Hyung Min-woo). It fuses the Western genre with supernatural horror and dark fantasy and is notable for its unusual, angular art style. The comic features a revenge-driven, undead gunfighter visibly patterned after Caleb, and includes numerous references to Blood, including a battle with zombies aboard a moving locomotive and a general plot line featuring a demonic takeover of the Old West.

In an interview in the third volume of Priest published by TOKYOPOP, Hyung admits the influence, mentioning Blood by name and going as far as saying the game and his comic are "inseparably related"; first serialized in 1998, the comic was conceived in the immediate aftermath of the game's release. Ivan Isaacs, Caleb's stand in, is on a quest to avenge his lost love Gena (in parallel to Ophelia) against the fallen angel Temozarela (equivalent for Tchernobog), which first includes battling his lieutenants such as Jarbilong, as Caleb does for Cheogh, Shial and Cerberus, as well as his cult of the undead. Notably, Isaacs' arsenal includes a Sawed-Off Shotgun, Tommy Gun, Dynamite and even a Voodoo Doll.

Further similarities can be gleamed from comparing these two quotations from their respective antagonists regarding bloodlust.

"Can you not see? Every life you have taken has made you stronger, and you have returned to me with a greater sacrifice than I ever could have wished. With the power you bring, I shall throw open the door between the worlds and inherit the earth."
--Tchernobog, E4M8: The Hall of the Epiphany

"When he follows his hatred, and comes to me, the final piece will be in place. With my powers complete, the forces of light will fall and my dark doctrine will spread throughout the earth. Ivan Isaacs. When the blood trail you willingly follow ends the light of the world will be snuffed out, and the age of darkness will begin."
--Temozarela, Volume 3: Requiem for the Damend

Priest itself has had some definitive cultural impact, including a widely panned 2011 feature film which overwrote the original with vampire lore; the changes however received Hyung's blessing. The film does still have an afterglow of influence from Blood, featuring a gravelly voiced wide-brimmed hat wearing antagonist (known only as Black Hat, played by Karl Urban) and a climactic battle aboard an armoured train; its melding of gothic weird western and science fiction dystopia is also reminiscent of Blood II.

Additionally, a song called "In the Presence of Enemies" by Dream Theater was also inspired by the comic, and a cancelled attempt at creating an MMO game occurred in 2003 (which, appropriately, melded in elements of first-person shooters). A character called Priest also appears in the brawler game Lost Saga by South Korean developer I.O. Entertainment. The comic is also often cited as one of the more prominent examples of manhwa to Western audiences.

In addition, it was examined in Undead in the West II: They Just Keep Coming edited by Cynthia J. Miller and A. Bowdoin Van Riper, which also mentions Blood; the connection between Blood and the comic is mentioned as well in The Undead and Theology edited by Kim Paffenroth and John W. Morehead. Priest was published in English by TOKYOPOP starting in 2002 and with its last volume, 16, being released in 2007. The story was never completed, with indications that an original 25-30 volumes were once intended.