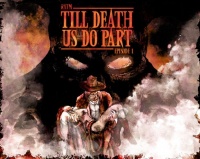 Rage Against The Machine

"Rage Against The Machine, RATM or simply ‘Rage’, is a combined effort by select members of the Blood community to create a Blood campaign worthy of remembrance and worthy of honouring, and hopefully complementing, the Blood title and its legacy. Rage’s objective is to expand on the Blood universe, adding a little innovation where necessary, while not compromising the spirit of the original title’s unbeatable action, breathtaking atmosphere and overwhelming fun factor. So far, Episode 1 of the campaign has been released, but the rest are coming up. All the Single Player maps included in this campaign are fully optimised and compatible with Bloodbath, Co-operative and Team Mode Play. Difficulty levels are also implemented. Rage Against The Machine has the added bonus of including custom music that fully captures the essence of the original’s soundtrack. The Rage Against The Machine story is told through a series of gripping, live-action cinematics."
--Official description

Rage Against the Machine was a fan add-on project to create a commercial quality Blood game; the title is sometimes shortened as Rage or RATM. Episode one was first released on October 31, 2007, before being re-issued as a "New Compact Version" on May 16, 2008, and is currently the only released portion of Rage Against the Machine.

The add-on includes a new soundtrack and is intended to add many new levels that are compatible with single player, BloodBath and cooperative play.

The story is intended to be played out through "live-action" cutscenes shown at the end of the episodes. It was created by Matthew “Daedalus” Kallis (project leader and mapper), Dimebog (musician), and Filip (oBe) Walgraef (artist and animator).

Daedalus essentially killed off the project on May 23, 2008 after finding a lack of time to continue mapping. 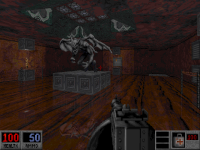 The game opens with an extended animated cutscene done up in the style of late 1990s pre-rendered opening introductions, which then proceeds to recap Caleb's gun-slinging past in the Old West, his ascension through the Cabal, and finally the betrayal of the Chosen and the murder of his lover Ophelia Price. It then cuts to a scene of Caleb approaching a temple, pitchfork in hand.

Note: on first play-through, the Blood Wiki staff visited no secret levels, so they remain undocumented for now. Feel free to fix this.

Episode 1: Till Death Us Do Part

Episode 1: Till Death Us Do Part

In a level featuring no enemies, Caleb gets himself let into the temple, ascends into its inner sanctum, and joins the other Chosen, Tchernobog's beast lieutenants Cheogh, Shial and Cerberus and the dark god himself. Tchernobog demands a sacrifice, and Gabriel is taken away by the spider queen, Ishmael is blasted by the two headed hell hound and Ophelia is taken away by the stone gargoyle. Stunned, Caleb attempts to run away (RATME1M1: Tchernobog's Fatal Flaw), and falls down into an underground mining tunnel and has to make his way through a shipping area (RATME1M2: Six Feet Under). He heads out into a nearby forest, wherein he duels with zombies rising up outside nearby cabins and reaches an urban area through a temple complex, filling a basin of blood to get a needed key (RATME1M3: Forest of Shadows). To further his escape, Caleb stows aboard a train in a wooden shipping crate, before storming out and leaping between two locomotives to reach his objectives (RATME1M4: Cabal Express). Crashing his way into the Green Town station, Caleb proceeds to "paint the town red", shooting his way through a gallery and an entire block of stores (RATME1M5: Green Town). Caleb exits into a sewer and pump facility, facing entire legions of undead in the murky waters, and briefly commandeering a wooden boat (RATME1M6: Knee Deep in the Undead). Caleb has now come full circle, and begins to storm through the temple he was first driven out off, intent on seeking his revenge (RATME1M7: There's No Place Like Home). Caleb returns to the inner sanctum, and meets Tchernobog, seemingly making short work of the dark god. He then collects a nearby key and ascends an adjacent castle to the Altar of Stone and sees Ophelia crucified (RATME1M8: Epiphany's End). The end cut-scene shows Caleb express his grief at his lover's demise, before being interrupted by Cheogh, who lunges at him, only to be defeated by Caleb's boom-stick. Caleb then takes out his zippo lighter and gives Ophelia a more respectful cremation.

The listed entry for episode two, with presumably a tongue-in-cheek place-holder title that parodies the name of the Sunstorm Interactive expansion pack Cryptic Passage.

Reception for the add-on was positive, with it holding a score 8.2 out of 10 on ModDB, with many of the reviews stressing the quality of the level design, as well as its conservative approach to Blood styling. The title, which it shares with the band Rage Against the Machine, caused some consternation and confusion, with the project's authors stressing that it also "happens to be a common saying." The release's manual stresses that the title was chosen for its unique status, as well as noting that it proved prophetic, hailing a number of technical and computer issues during the development of the project.

"The levels are very well done and the action is well paced (with one notable forest encounter genuinely frightening), though very conservative to the original game to the point of lacking a defining architectural character of its own (when compared to Death Wish certainly), which is made up for by its own quite indulgent romp through Blood lore - including opening with a in-game recreation of the Chosen's casting down and a twined repeat of the first episode's famous train level. oBe's opening and closing animations also provide another rich experience for players. Definitely a must-have for any hardened Bloodite, and a sadly incomplete experience."
--Graham "Gideon" Wilson, Blood Wiki