"We didn't want the add-on to be as serious as the original game, so the storyline for the add-on is there more for setup and humor's sake than anything else. The add-on picks up where the first game left off, with the Chosen stranded in the Ancient One's realm, trying to make their way back to Earth. They set up camp one night and begin to tell scary stories about their past around the campfire. This attracts the attention of the Nightmare, a creature that inhabits the Ancient One's realm. The Chosen are then subjected to their greatest nightmares one-by-one before Caleb finally faces off with the creature itself."
--James Wilson III

The Nightmare Levels is the sole expansion pack for Blood II: The Chosen, as Blood II: Revelations was never released. It adds a new six level single-player sequence, some new BloodBath maps and options and bug fixes.

The Nightmare Levels takes place shortly after the ending of Blood II. Although never explicitly mentioned, Caleb succeeds in binding the realities and the Chosen are trying to find their way home to our reality. They stop to make a campfire and pass the time by telling scary stories, until suddenly Caleb disappears, and finds himself in each of the Chosen's tales.

In certain levels, the player has the ability to play as each of the Chosen within the context of the story, as each narrates his/her tale. Each level contains different weapons and abilities that cater to the Chosen's strength and weaknesses. For example, Ishmael and Ophelia's story have more magic weapons, while Caleb and Gabriella contain more firearms and ammo.

Like the Plasma Pak, the expansion pack released by Monolith Productions for Blood, the game includes new weapons, new enemies and new maps for BloodBath. This is the last offical Blood product and the last ever made by Monolith as there was no "Blood III" ever created, so this is where the canon ends. However, the Blood community to this day continues to make non-canon fan advancements to the Blood universe. 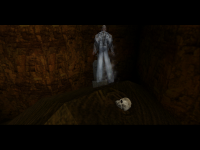 Following the defeat of The Ancient One, the Chosen begin the long journey back to their own reality. Gideon, the primary antagonist of Blood II, has been watching all this from his own unique vantage. After being bested by Caleb, Gideon's soul did not in fact perish; instead, it was trapped inside his skull. Making the best of things, Gideon decides to recall one of the adventures he has witnessed, which begins with the four Chosen sitting around a campfire. Although capable of handling the odd demon, they were unprepared for the arrival of a physic beast called The Nightmare, which they inadvertently call to their campfire by telling scary stories.

The introduction cutscene opens with a shot of a grave as Gideon narrates.

"Oh yes, hello. Surely you'll remember me. The power-mad and vainglorious Gideon. Once upon a time I pretended to the throne of the gods. Well, I suppose I got my wish. My undying soul is bound to this cranial prison for all eternity, no thanks to Caleb and his Chosen Ones. Anyway, there's no sense being bitter about it. I imagine one day I'll serve as a muse to some unfortunate playwright who wanders this way. Until then, gentle player, I will amuse you... with this little anecdote. After defeating the Ancient One, the Chosen had a long walk home through the otherworld. They were able to handle the odd demon or two that came their way, but what they were not ready for was the powerful psychic terror that stalked the wastes -- the Nightmare. Fools that they were, the Chosen practically invited a visit from this devil when they decided to tell scary stories during one of their repasts. Little did they know that each one of them was about to be transported to their personal hells. Observe, and be entertained, dear player."
--Gideon, opening Nightmare Levels narration

Caleb defeats the creature, after which Gideon returns to his narration.

"And so our story comes to an end. Caleb is victorious yet again. It seems nothing can stop him. At times it is almost as if the unseen hand of some otherworldly being is guiding his actions. But it is best for me not to dwell on such things. For now I will content myself with observation. The Chosen have many adventures ahead of them -- stories to tell, battles to fight, and empires to forge. Perhaps one day, I will find a way to make my return. And on that day, I assure you, Caleb will burn!"
--Gideon, closing Nightmare Levels Narration

However, somehow, Ishmael interrupts him, asking who has taken the last marshmallow. An annoyed Gabriella demands that they all shut up before she kills them both. 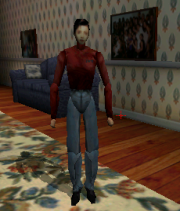 Although this expansion gives more storyline in one chapter than any of the original chapters of Blood II, it introduces several glaring omissions, inaccuracies, and continuity details. Some of these may be fabrications by the Nightmare, but some of them are blatant anachronisms. A possible explanation is that the original memories have faded too much, forcing the Nightmare to use images of the modern world to construct its imaginary world, in which the Chosen would relive their past.

It should be noted that the gremlin, the brown-robed cultist, and the Nightmare were not developed exclusively for The Nightmare Levels. They can be seen in the original code for Blood II. There is an unused map in the game that features these three models, although they lacked any AI programming at that point.

The Nightmare Levels, although disliked by the mainstream press (by GameOver, Game Genie, GamesMania, MeccaWorld and The Adrenaline Vault, for example), was generally well received by Blood fans. Critics of Blood II were pleased to see a return of a more Gothic atmosphere and the much beloved Robed Cultists (which, if there had been time, would have been in Blood II proper), and those who enjoyed both games simply liked the look back. The new Combat Shotgun was also liked by fans, with the the much anticipated Flayer receiving a mixed reception. The expansion was criticized however for being short, consisting of only six single player levels, and despite containing patches for the rushed base game the expansion itself was still widely considered underdeveloped. As such, many people complained it was not worth the price; a moot point now that it is included as a charge free extra on GOG.com and other digital download services. The Nightmare model and lack of a more substantial ending was also not well received, especially since it ultimately serves as the conclusion to the entire series.

The credits for Blood II: The Nightmare Levels can be found: here.

<< Blood II: The Chosen | None >>
Retrieved from "https://blood-wiki.org/index.php?title=The_Nightmare_Levels&oldid=43685"
Categories: