From Blood Wiki
< User:Gideon
Jump to navigationJump to search

A Study in 90s FPS Plots[edit]

First person shooters often cause competition among fans over which had more storyline. This is a study of first person shooter storylines from the 1990s (1900-1999) based on the collective conciseness of gamers. Which games (A) have enough storyline to make a large Wikipedia plot section and (B) provoked gamers to write them up on Wikipedia in the first place and in detail. This only contains plot sections not articles like "List of [insert game] creatures" and so forth, which contain enemy, object and character back stories. This is also not counting expansion packs or any other additions not in the main game. The entries for the Blood series and Shogo are from the Blood Wiki, but they are comparable to the Wikipedia plot entries (the Blood II one has been shortened as some Wikipedia admins thought it was too long, however, I managed to write a summery that did the plot decent justice, and followed the 700 word rule. It is now a little smaller than Half-Life but that is because Half-Life was not as faithful to the 700 word rule). These are marked by, if long enough, how many pages they fit in a word processor document (specifically OpenOffice.org Writer). If they are not long enough they are ranked by the number of and size of the paragraphs in the plot sections. I searched through the Wikipedia articles on various game developers to find all the various first person shooters they made in the 1990s. As this is looking back on the 1990s it is organized in reverse order, first the more recent "true" 3D games and then their "2.5D" ancestors. This article contains games by id Software, 3D Realms (aka Apogee), Epic "Mega" Games, Valve Software, LucasArts, Ritual Entertainment, Monolith Productions, Raven Software and others. Oh, as a Wikipedia contributor who is personally interested in writing up video game plots I should mention what contains my own work: Blood II, Duke Nukem Forever, Shadow Warrior, Pie in the Sky, and Hovertank 3D. 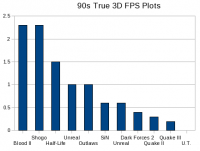 Am I missing a notable game? Got any comments? Post them on this article's talk page!